Initially the robes were from Gryffindor because I made the costume as a Halloween display for my old workplace, and red was the most recognizable of the houses. Now that it's mine again, though, I get to be whichever house I want ^_^   So I ripped out the red lining and replaced it with blue. The front and hood are fully lined, but I skipped lining the sleeves because I didn't have enough fabric :(

The sweater and skirt were also made by me, but the dress shirt was store-bought. My house tie isn't the licensed version, but I think it does a good job regardless. There are a few details about the costume that don't exactly match the film's school uniforms, but that's the beauty of doing costumes also based on books, I think: artistic liberties!

There are two different wands in my photos - one was on loan from my excellent friend Kia, and the second is one I whipped up last-minute after returning Kia's. It's much more "organic" than most wands in the HP universe, but I like it, and eventually I'll have the time to finish my more polished version.

What, you don't remember a Penelope at Hogwarts? She was hardly a main character, but was dating Percy, if that helps ^_^  Technically, she should have a prefect badge, but it's not something I'm going out of my way to get. If I happen to come across one though, it will be added.  It does bother me a little bit to be using fan-art as a reference here, especially since the art is not what I specifically based the costume on; but considering that my character is a combination of film-Penelpe and generic book-Ravenclaw I think it's the best I can do. Art, btw, is credited to ravenclaw-house on DA.
I hand-knit the scarf based on the "Red Scarf Project Bias Scarf" pattern by Maia Discoe and Dea Terra, modified to add colour-blocking for the stripes within the pattern of the stitches. I looked for patterns for a long time before deciding on this one - the bias stripe and simple lace designs give it a more polished look than a plain garter-stitch scarf without being much more work. 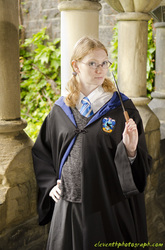 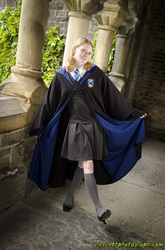 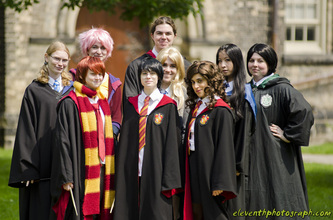 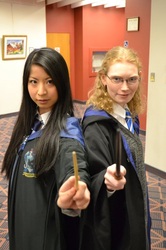 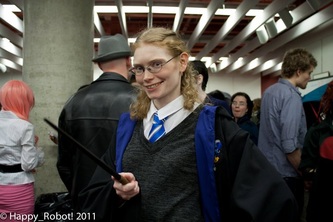 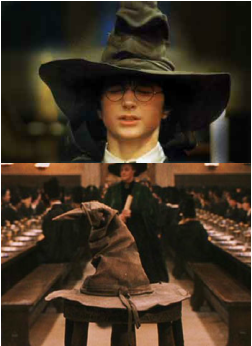 This costume was made for my roommate at her request. She works at a bookstore, and was pretty much required to be in costume for the "Half Blood Prince" release party, and didn't want to be a witch or wizard like everyone else.

It's not my best work (UGH, that brim), but then it's also only the second or third cosplay I made, the only mascot-type (to date!), and I did it in less than 48 hours while sick. Considering she won the staff costume contest and split the prize with me, I can't really complain though. 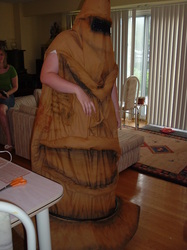 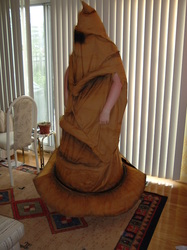 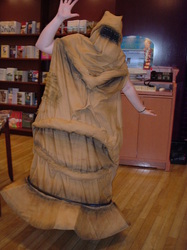 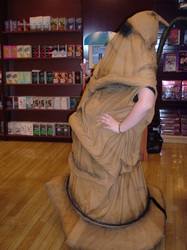 Events:
2005 Half-Blood Prince release party
Awards:
Chapters staff costume contest
Each photo in the gallery is labeled with its photographer; please visit their websites!
Eleventh Photograph: http://eleventhphotograph.com/
Everage: http://everage.deviantart.com/
Happy Robot: http://www.facebook.com/HappyRobotisHappy
Lydia Noms Bacon: http://facebook.com/laceroses
All photos are property of their respective owners and may not be used without permission.